Attachment theory: what do teachers need to know?

« Back to latest articles

Attachment theory is frequently cited as an important part of a teacher’s understanding of how to manage and understand behaviour in the classroom.

Nick Rose unpacks some of the background to this area and looks at how it maps on to practice in a meaningful way.

The British psychologist John Bowlby is fairly synonymous with attachment theory. From his clinical work with ‘juvenile delinquents’ over the course of World War II, he began formulating ideas about the role of early and prolonged separation from parents and caregivers in the development of problems in those children’s social and emotional development.

The core of his theory is that attachment is an evolutionary adaptation which is characterised by a child seeking proximity to a caregiver when that child perceives a threat or suffers discomfort. Given the intense needs of human infants, it is perhaps unsurprising that the formation of a ‘deep and enduring emotional bond that connects one person to another across time and space’ evolved to improve the chances of an infant’s survival.

Over the first year of life, an infant begins to develop attachments to parents or carers. As these attachments form, we tend to see characteristic behaviour in infant interactions with their attachment figure:

Attachment figures aren’t simply individuals who spend a lot of time with the infant, or the one who feeds the infant; they are typically the individuals who respond the most sensitively – for example, often playing and communicating with the infant. For many infants, the principal attachment figure is their mother, but fathers, grandparents or siblings may also fulfil this role. By about 18 months, most infants enjoy multiple attachments, though these may be somewhat hierarchical, with a primary attachment figure of particular importance. The behaviour relating to attachment develops over early childhood – for example, babies tend to cry because of fear or pain, whereas by about two years of age they may cry to beckon their caregiver (and cry louder or shout if that doesn’t work!).

Bowlby believed these early experiences of attachment formed an internal ‘working model’ which the child used to form relationships with secondary attachment figures – and later, friendships with peers and eventually romantic and parenting relationships in adult life.

There are individual differences in the behaviour related to attachment. Famous observation studies by Mary Ainsworth (who worked with John Bowlby during the 1950s) identified that in normal children there were a range of attachment types:

The teacher isn’t in a position to either make the clinical judgement or investigate the cause of problematic behaviour they suspect may relate to a safeguarding concern.

So, whilst there’s reasonable evidence to suggest that these individual differences in attachment correlate to differences in behaviour within school, it is very important to note that these differences are not ‘pathological’ in a clinical sense. Given that about 30– 35% of representative populations have an ‘insecure’ attachment, NICE suggests that it is unhelpful to view insecure attachment as an ‘attachment problem’.

A popular misconception about attachment is a conflation between the ‘types of attachment’ that children possess and an ‘attachment disorder’. CoramBAAF, a leading charity working within adoption and fostering, suggests that even when used by those trained to do so, attachment classifications cannot be equated with a clinical diagnosis of disorder. While the insecure patterns may indicate a risk factor in a child’s development, they do not by themselves identify disorders.The term ‘attachment disorder’ refers to a highly atypical set of behaviours indicative of children who experience extreme difficulty in forming close attachments. NICE suggests that the prevalence of attachment disorders in the general population is not well established, but is likely to be low. However, there are substantially higher rates among young children raised in institutional care or who have been exposed to abuse or neglect. The 2003 Office for National Statistics report for the Department of Health(3) estimated that somewhere between 2.5% to 20% of looked after children had an attachment disorder (depending on whether a broad or narrow definition was used).

There is a broad distinction between two classifications of RAD:

Unfortunately, there are also no widely applicable, evidence-based set of therapies for RAD. However, there has been significant concern expressed about some therapies. One example is ‘holding therapy’, involving holding a child in a position which prevents escape whilst engaging in an intense physical and emotional confrontation. CoramBAAF argues there is nothing in attachment theory to suggest that holding therapy is either justifiable or effective for the treatment of attachment disorders. Less controversial therapies involve counselling to address the issues that are affecting the carer’s relationship with the child and teaching parenting skills to help develop attachment.

What should teachers be doing?

This is why we can question the apparent excitement about attachment theory at the moment: there’s nothing a teacher can do that they shouldn’t already be doing.

Firstly, given the relationship between attachment disorders and abusive or neglectful relationships, perhaps some teachers are worried that they need to know about attachment disorder in order to fulfil their statutory safeguarding responsibilities. However, it’s important to note that whilst some children with RAD have suffered abuse or neglect, that doesn’t mean that problematic behaviour is evidence of such. The teacher • isn’t in a position to either make the clinical judgement
or investigate the cause of problematic behaviour they suspect may relate to a safeguarding concern. If a student is behaving in a way which concerns you, then report that concern to your designated member of SLT (as you would any safeguarding concern). Whether or not you might think a child has an insecure attachment or a disordered attachment isn’t really your professional call.

Secondly, it may be that some teachers feel they need to know more about attachment in order to support students with behaviour problems in school. However, the advice for working with RAD students isn’t really any different from good behaviour management generally. Teachers should not confuse their role in loco parentis with being the primary caregiver for a child. For example, the Center for Family Development is an attachment centre based in New York specializing in the treatment of adopted and foster families with trauma and attachment disorder. In their Overview of Reactive Attachment Disorder for Teachers they point out that, as a teacher, you are not the primary caregiver for a child you teach.

You cannot parent this child. You are the child’s teacher, not therapist, nor parent. Teachers are left behind each year, [it’s] normal. These children need to learn that lesson.(4)

There is an important difference between the professional role of a teacher and the role of a primary caregiver, and it’s vital that recent interest in attachment theory within the profession doesn’t blur that line. Where teachers are concerned that behaviour presented in the classroom might indicate abuse or neglect, they are already obliged by law to report these concerns (but not investigate them or try to involve themselves in resolving them).

In terms of managing the behaviour of students with attachment problems so that they can overcome the difficulties of their family background and experience success within school, the guidance suggests things like a structured environment, consistent rules, professional distance and focusing feedback on behaviour not the child – advice that forms the basis of good behaviour management regardless of the cause of problematic behaviour.

It may be the case that specific children with RAD will have different strategies which will help them achieve in school. However, that’s also the case for any student with SEND. Perhaps what is important for teachers is not specific training in attachment theory to help them diagnose attachments, but a clear understanding of their school’s SEND system and time to read, implement and work with SEND coordinators to ensure any specific strategies suggested by an educational psychologist or child psychiatrist are employed effectively.

Sign up for our newsletter to receive information about new events, speakers sessions, and more. 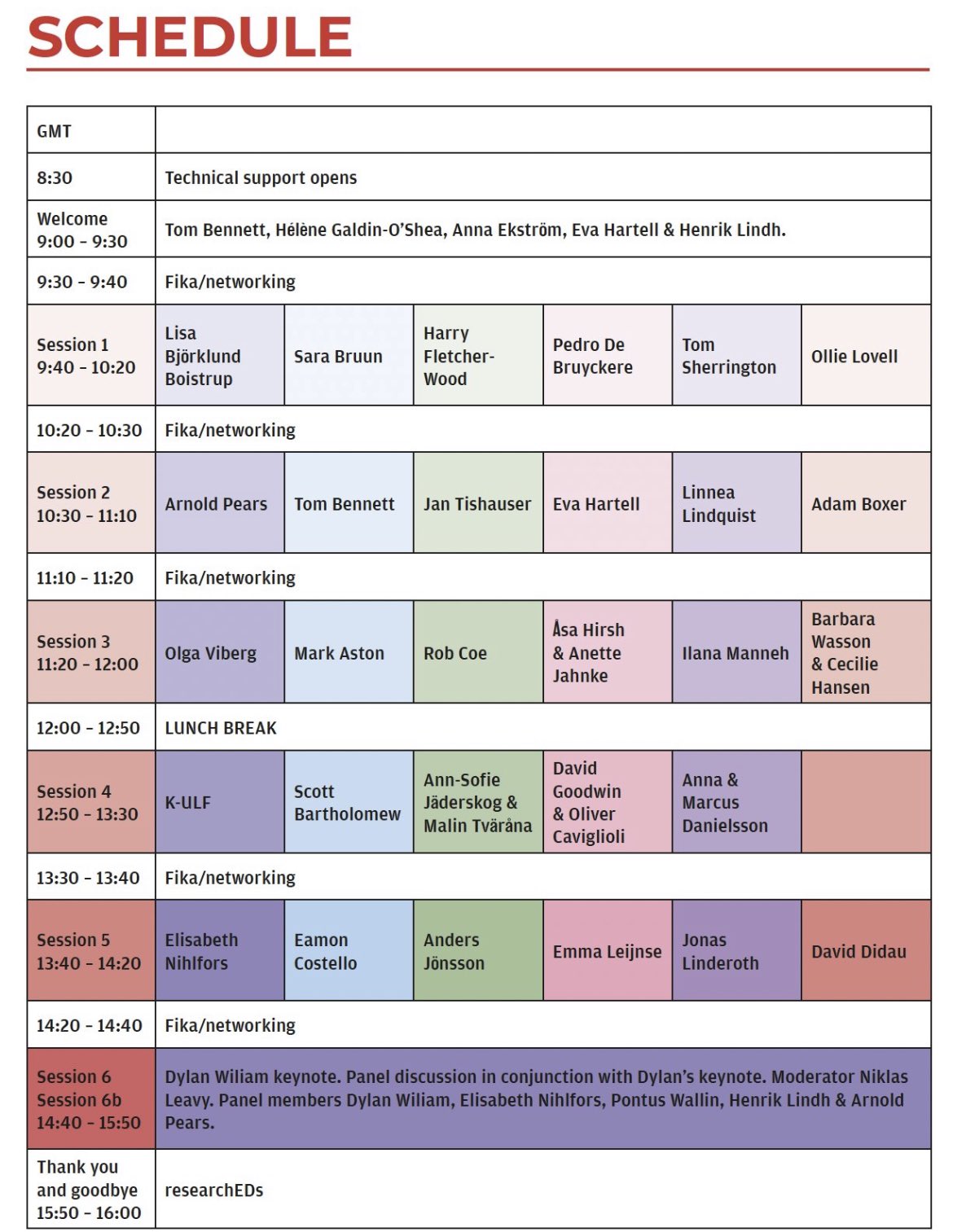